RED is the New colour of CYBERBULLYING

Doug Sadler says RED is the new colour of Cyberbullying! 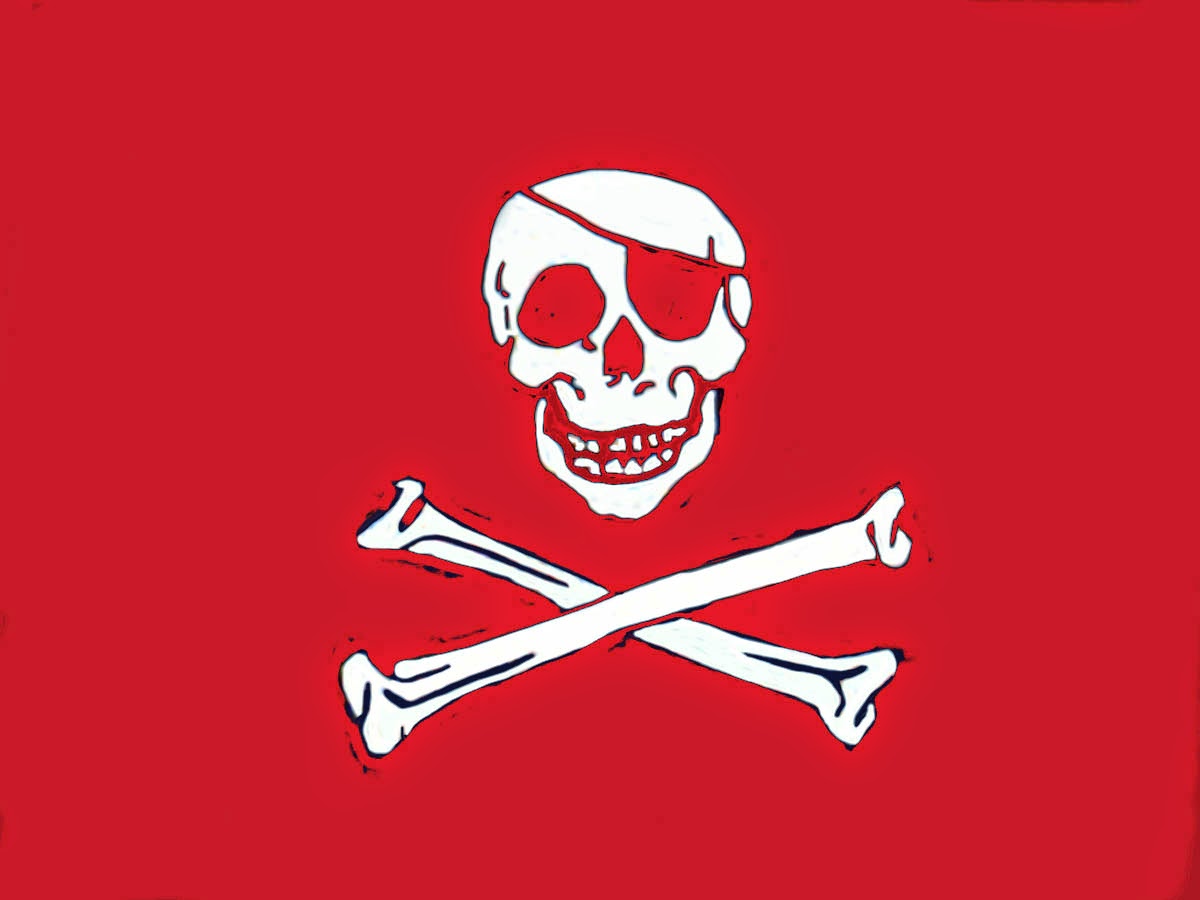 complete bogus post.  I am using it as an example for a presentation of the core of most of the Cyberbullying we deal with. We are all now Publishers on the WEB.
We can say whatever we want.  Our children get that part.  They will say whatever is on their minds and have instant access to a medium to share it with the world.  However, what gets lost on them is the responsibility portion where there is accountability for what is said. Our children have a fundamental difference from their parents and that is the filter between their ears. I am not qualifying that statement to say better or worse but clearly different. They are willing to share just about anything.  Now they are Publishers on the web and with that comes power, vulnerability, and most of responsibility.
Posted by Douglas Sadler at 9:03 PM 1 comment:

The Windsor-Essex Catholic District School Board was in the news in Saturday's Windsor Star and other local media Monday when they discussed their plans to use electronic textbooks as way to support student learning with technology.  St.Christopher Catholic Grade School was the site selected to demonstrate the new iBooks 2 app among others.  Grade 6 students were working in the school's 21st Century Learning Environment and helped demonstrate how they use iPads in there school. There are many pilot projects like this one all over the board with new ones starting all the time.

These new E-Books offer improved learning opportunities by bundling interactive components as well as text.  Students can interact with E-Books through audio, video, and physical actions such as moving the ipad in different directions or even blowing into it to make wind.

Coupled with the board's WiFi installations across the board these opportunities and projects have become a reality.

The Perfect iPad Case depends on how you want to use the iPad and what you want to spend.   Below is a short video where I showcase 3 possibilities for the iPad2.
Careful  consideration needs to be done before you purchase a case.  You need to weigh the following factors: 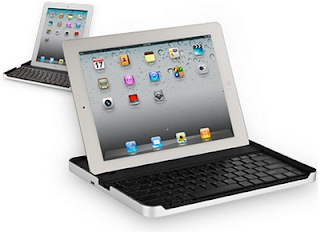 Please view the video below for more information and have fun!

Give the video a moment to load after hitting play.

Balancing Technological and Traditional Methods in the Classroom

I had the pleasure of visiting one of our Elementary Schools as a guest reader for a grade 2 class.  I wouldn't want to miss out on a chance to get involved with some of the great activities going on in our schools.  My 3 kids are all in the age range of grade 2 students so it wasn't hard to locate a book that should be engaging.  After a quick poll of the kids I had my books selected "How I Became a Pirate".  I decided to go with the pirate theme so I brought a Jolly Roger flag and some other props.

For those of you who are familiar with the book it it lends it's self to some fun and exciting audience participation with some good old fashioned pirate speak!

I felt compelled to introduce some technology into the field trip so I decided to incorporate the ipad into the second part of my hour with the kids.  I took out my iPad which is in a case that looks more like an organizer than anything.  Immediately the group was inquiring whether the organizer was in fact an iPad.  They know.

I used the free Toy Story app which is really quite impressive.  The app reads the story using music and the characters real voices.  As the story is read the words are highlighted.

The students were captivated with a story they have seen on TV a number of times.  Was it the device that was making the difference?

The novelty will diminish as time goes on but we did make a great find.  One of the neat features of the app is it allows the student to read the story and the ipad will record the student's voice.  Every student in the class wanted to participate so they could see the animation, hear the music and most importantly hear there voice.

iPad have many uses in the classroom and this is just one of them.  This could be used as a fantastic station however the price tag can be a slight deterrent.  The classroom teacher decided to use a tape recorder and stories in the classroom as a replacement for the iPad which worked like a charm.

Leverage the technology to build the skills.  Do we need iPods, iPads, and other technology to get students to read?  Some studies say this is how we will be able to get boys to read.  I think the answer is in the middle.  Balance is what we need.  Technology will be quite effective as long as it is applied to meet specific learning goals in conjunction with traditional methods.  For more information on the application of learning goals and the use of ipods visit Kelly Powers Blog.
Posted by Douglas Sadler at 11:59 PM 2 comments:

The Windsor-Essex Catholic District School Board has there own education version of Google Docs which is virtually the same.  So whatever applies to Google Docs applies to what we call Tools2Go 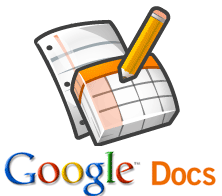 Our teachers would like to add some cross application assignments using Google Drawings and Google Spreadsheets.  The task today is to insert a Google Drawing and Spreadsheet into a Google Doc.  This is not an easy task because it is not a simple point and click operation. There is no argument it should be but there are some options for you to consider.  I recommend teachers consider using Google Sites ( Wiki Tool) to merge the Spreadsheet and Drawing.    Every student has access to Google Sites.  Sites will allow for easy merging of most Google tools.  Check out the video below for instructions.
Posted by Douglas Sadler at 5:12 PM 2 comments:

From time to time I come across some exciting technology and I am going to star sharing here on my blog. I have been looking for a good ipod doc but just didn't want to fork out the money required for a good one.  There are many great ipod docs out there ranging from $50 to $600. 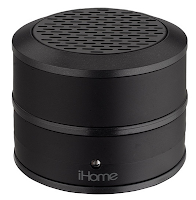 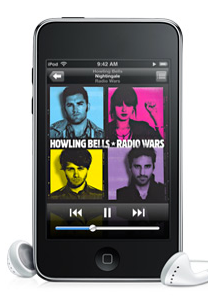 The speaker is about 2/3 the size of an itouch.  The comparison above is close.  (Dimensions: 2.36" W x 2.29" H x 2.12" D)
The speaker comes with a built-in li-ion rechargeable battery.  The battery lasts for over 6 six hours and can be recharged by plugging it into the usb port of your computer.
Obviously the most important part of any speaker is how it sounds.  This speaker can easily fill a class room with excellent quality sound.  I was amazed at how good the sound was from such a small portable speaker.  The speaker will plug into ANY mp3 player through the headphone jack.  For even more impressive sound you can twist the top and bottom of the speaker and it expands to give you a richer sound with added base.  ihome describes this as "Vacuum bass design for enhanced low frequency response and sound beyond size" 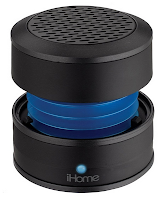 I was able to find this speaker at WalMart for aproximately $18.96 plus HST.  The speaker comes with a storage bag and a cord that is used to connect to the mp3 and to charge.  If you search iHM60LC on the net you will find it all over the web.  You even have a choice in colour (Red, Blue,Grey)
If you have any comments about this gadget or another please feel free to comment below.
Posted by Douglas Sadler at 6:13 PM 3 comments:

A Great Citation Tool For Your Schools

The site can be located at the following link:  OERB  The OERB or Ontario Educational Resource Bank is available to Ministry of Ontario Students and Teachers. 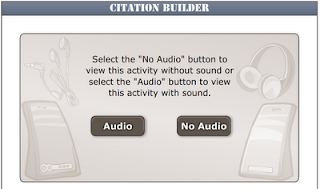 The site will give you the option of wether you would like the details about citing read to you or not. 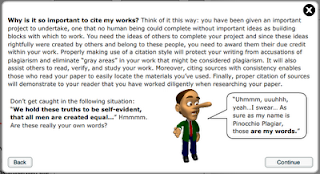 Once the site demonstrates why you should cite materials and how you can build your own citations using MLA and APA for different media: 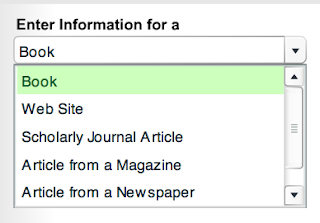 Students can easily fill out the online forms: 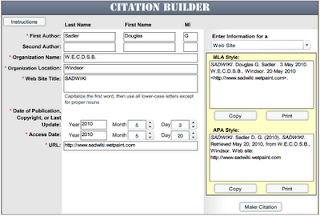 and then copy and paste the citation into their work. 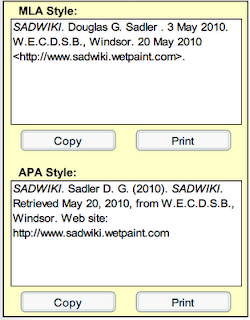 Where in the world?

SadBlog - The BUZZ by Douglas Sadler is licensed under a Creative Commons Attribution-Noncommercial-Share Alike 2.5 Canada License.

we are in
CanadianPlanet
canada's webs